Dear Friends who visit my blogsite - I'll try to be more active on here. Lately, I've been busy - I'm going to seminary, and am a lay pastor locally at Franklin Grove Church of the Brethren. Visit my YouTube Channel where you can hear my sermons. It's relatively new, but I'll be growing it I hope, as time goes on and permits. Blessings to you all! Stay well! Diana 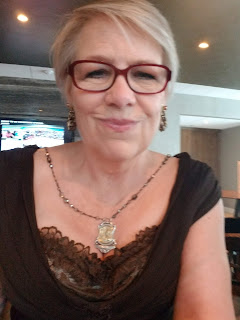 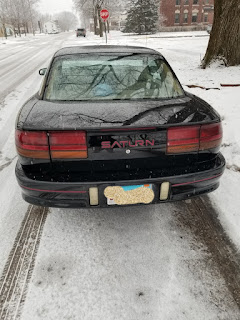 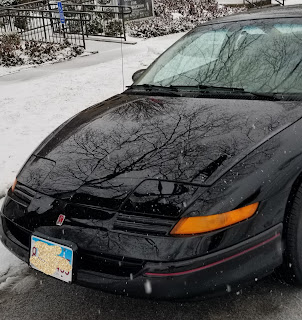 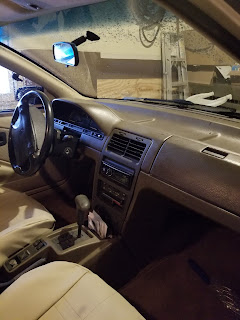 Baby got new coat too! 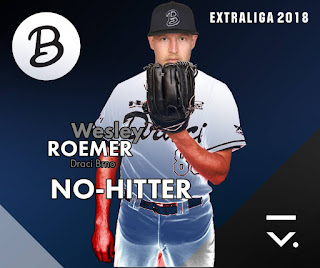 The Moment my Son got his Bride

View from the room of my hostel, Venice, Mother's Day vacation, 2017.

My oldest son right where he likes to be ... in the thick of it all. 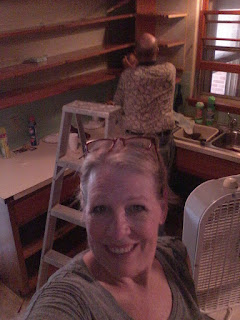 Had a bad day? Watch this. Enjoy!

Laughed until I cried.

I don't even like soccer, but this video was the best thing i've seen today :P (not car related, but worth a watch!)

Posted by Street FX Motorsport & Graphics on Sunday, May 3, 2015

I'll never get enough of this 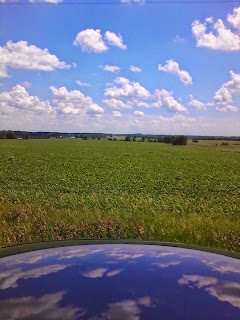 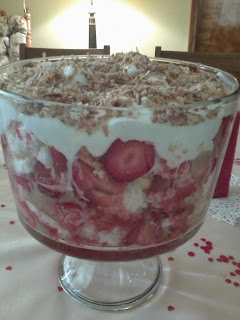 Here's the ingredients and recipe: Trifle Ingredients Fresh baked angel food cake (two); Godiva White Chocolate Liqueur (brown bottle); (use about 4-5 oz) Rose's Grenadine (red); use about 4-5 oz. Two pints fresh strawberries, hulled and sliced; two banannas, sliced and tossed in lemon juice; about 3/4 cup toasted coconut Homemade burnt sugar vanilla pudding (use vanilla pudding from Betty Crocker receipe book; add burnt sugar syrup or let first ingredients carmelize a little in pan creating the burnt sugar effect); About 1.5 cups whipping cream about 1.2 C of cane sugar ** Prepare the pudding in advance though it will drizzle better when warm. Start it at about 10 a.m. Toast the angel food cake by slicing it in half and placing under broiler. Stand by and watch it - pull out after it starts to carmelize and flip it, repeating on the other side. Let sit. Wash, hull and slice strawberries, set aside. Slice bananas - drizzle with lemon juice and toss; Tear or gently slice angel food cake into large bite-sized chunks. Layer ingredients - beginning with cake at the bottom. Cake Strawberries Drizzle with Godiva and Grenadine; Cake Bananas, drizzle, etc., until fruit and cake are about an inch and a half from top of Trifle bowl. Set aside. Whip cream with sugar until it holds its shape but not until it's stiff, or half if it to stiff the other half half way. Cover top of trifle with the loosest cream, so that it snakes its way down through the cake and fruit; Cover the trifle with the stiffer cream. Put about 3/4 c of coconut on a cookie sheet and place under broiler - stand and watch. When it is toasted take it out and let it cool. Layer top of trifle with the toasted coconut - you can hold off and do this before serving. Trifle may be best when done the night before. This is my OWN recipe, and I hope you enjoy it and if you share it, link my blog. Thanks!
Posted by Diana Verhulst at 2/15/2014 01:52:00 pm No comments: 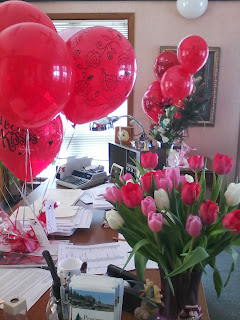 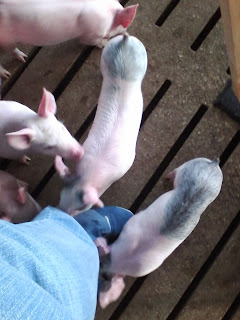 The Eyes Have It

It’s My Life By Diana Roemer This story is for women. For I am certain none but another female could comprehend the true tale I’m about to tell. Nobody likes saving money more than me. That’s why when the price of my favorite mascara (which, in case you’re a guy, is that dark stuff we ever-so-carefully layer onto our eyelashes) shot to nearly $30 a tube, I quit. I quit because I knew I could buy a drug store version for a third of Lancôme’s cost. So for a few years now, as my stash of “the good stuff” has dwindled to near nothing, I’ve amassed tube after tube of the bargain brand mascaras, brightly packaged in their blister packs, all promising lush, full, amazing, you-will-be-a-goddess-now-if-you-just-try-me eyelashes. In search of the Holy Grail of mascara, I’ve tested brands like Maybelline, Bonnie Bell, Cover Girl, Avon, Almay, and Revlon -- and, sadly, report there is nothing like the pricey Lancôme Precious Cells mascara. Nothing. Resigned, now, after years of arduous cheap mascara shopping (I’m so tired) I finally decided I must return to the almighty altar of Lancôme. So on a Sunday night, I began again to troll Lancôme’s online shop. I felt good about making the decision. After all. One’s eyelashes must be satisfied. I put a few choices into my “shopping cart,” and without actually clicking “buy now,” (I sleep on major purchases), I hit the hay. And then the next day – a Monday -- came. Mondays are notoriously cursed for me. That Monday, at about 8 a.m., I’d finished scraping an old Lancôme tube of its final contents happily stroking on what was left of “plum glimmer”-colored Precious Cells (which I bought about three years ago when the price was less than a barrel of oil). I think, in fact, they call it Precious Cells because it’s made with something so special the price of a few tubes rivals that of a small Porsche. And after finalizing my ritual of fluffing my eyelashes, cheeks, and lips, I stood back and looked. I was satisfied. This was going to be a good day. A good Monday. I had a ton of work at my office. But I was energized. Because (trumpet sound) I was wearing purple Lancôme “Precious Cells” mascara and I’d decided to buy more, yes more, MORE MORE! I was so pleased with that decision I was almost willing to enjoy the onset of winter when I looked out the window and realized “it’s snowing. It’s Monday. And I’ve gotta get on the road fast.” This called for the Cavalry: Much Caffeine! Forcing myself to remain upbeat despite the worsening dread of the 31.9-mile commute I was facing, I moved to the cupboard and chose a coffee cup from my vast coffee cup collection which just about matches – in sheer numbers -- the volume of my now-cast-off cheaper mascara collection. I chose an 8-inch tall red and white cup that features drifting colorful snowflakes. I was feeling kind of clever. Snowing outside – snowflake cup. I poured the snowflake cup about ¾ full. I took a sip. And then it happened. As I pulled the cup away from my face, it splashed. Like a wave crashing onto a beach, coffee slammed into my left eye. Not just the corner of the eye – directly INTO and ON the eye, a direct hit, the kind of hit that people sue fast food chains or cup manufacturers for. Every other woman who encounters the same issue might get the coffee on her blouse. Or in her hair. Or on the floor. Not me. I get it smack on the eyelid – the lid protected by the eyelashes that had the last of the million dollar mascara on it. My Precious Cells project had become a not-so-precious mess. I stood in my quiet kitchen, snow blowing outside, and for just a moment, my eyes shut, I contemplated the masterful symmetry of how this could happen. And I decided there had to be an angel watching over me that didn’t want me to get in my car just yet. I trudged back to the makeup mirror. Plum-colored mascara was smeared over and under my eyelids, dotting my skin like lavender ornaments on a Christmas tree, dripping from my lashes as if I’d been crying brown tears. I began the careful process of removing the smears. And I thought to myself: It’s a Monday, that’s for sure. But there is, yes, an upside. I know, for a fact, without a doubt, that I am still, and probably always will be, a true blond. And I now get to click “buy now” guilt-free. Life is good. ****
Posted by Diana Verhulst at 11/26/2013 01:08:00 pm No comments:

Tales of the Heartland

The leader of the Pack~! 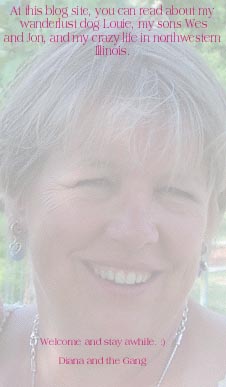 She's the mother of two boys and still alive! This proves, beyond a doubt, that there surely is a God. And he is good!

"It's only in the mysterious equation of love that any logical reasons can be found." (Said by Princeton mathemetician John Nash during his Nobel Peace Price acceptance speech. Source: A Beautiful Mind.)


And yet another take on love:
"Your heart starts to feel like an overcrowded lifeboat. You throw out your pride to keep it afloat, and your self-respect and your independence. After awhile you start throwing people out-- your friends, everyone you used to know. And it's still not enough. The lifeboat is still sinking, and you know it's going to take you down with it. ... I think that's why I'm sick of love." Said by Karla, in Shantaram, a novel by Gregory Roberts.

“Bad men need nothing more to compass their ends, than that good men should look on and do nothing.”― John Stuart Mill, Inaugural Address Delivered to the University of St Andrews, 2/1/1867


"And above all, watch with glittering eyes the whole world around you because the greatest secrets are always hidden in the most unlikely places. Those who don't believe in magic will never find it." - Roald Dahl

Diana Verhulst
Prophetstown, IL, United States
I am a residents of PTown USA, and I work in Franklin Grove, Illinois. 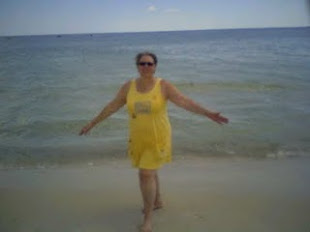